​MOLENAER, CLAES (NICOLAES) JANSZ (c.1626 Haarlem 1676)
A Winter Landscape with Figures on Ice outside a Town 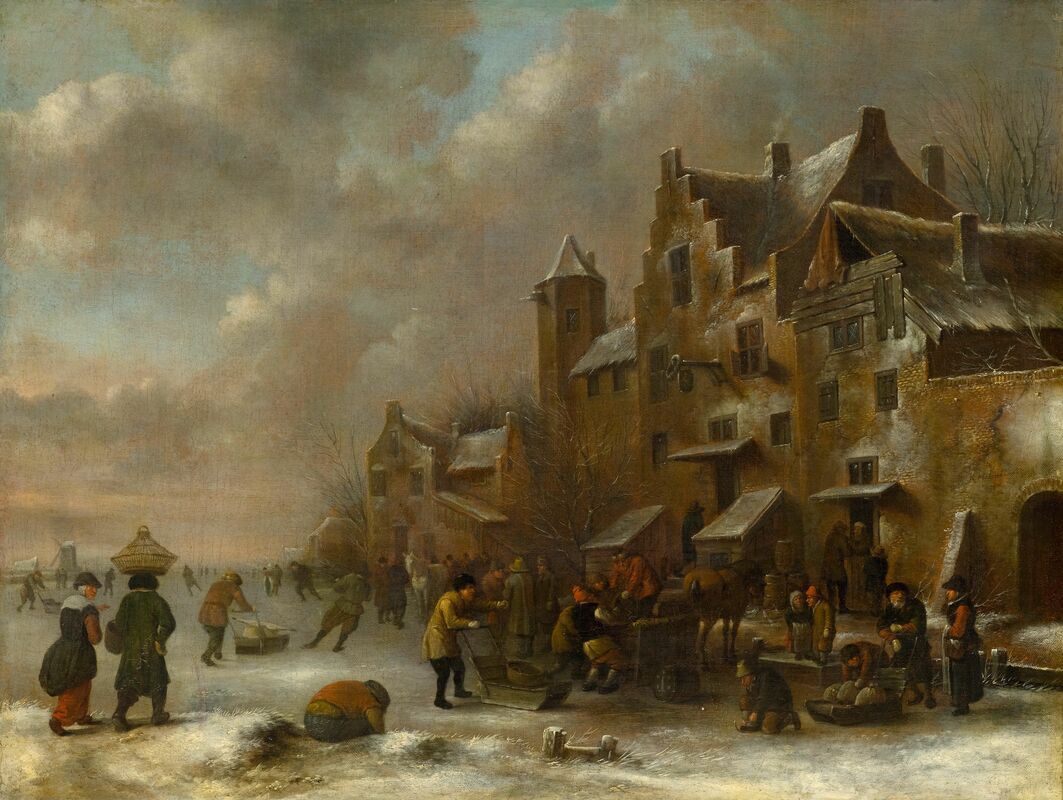 While in the Southern Netherlands winter landscapes were already painted by various artists in the late 16th century, the earliest examples were introduced in Holland in the early 17th century due to the decisive impetus of Hendrick Avercamp (1585-1634). Haarlem-based painters such as Esaias van de Velde (1587-1630), Salomon van Ruysdael (1600/03-1670) and Isack van Ostade (1621-1649) were instrumental in developing more true to nature winter landscapes and depicted the beauty of their own surroundings.

The compositional scheme used in the present work with its diagonal architectural motif was often utilised by Molenaer to create a convincing illusion of space, guiding the eye into the atmospheric distance. The richly textured snow highlights the warm brown buildings, which stand out against the clouded sky. Molenaer has enlivened the scene with numerous figures at play and work, in a manner typical of his winter scenes. While some are shown ice skating or sleigh riding, others reach for their skates, stand watching the busy scene and chatting or transporting wares on sleds.
​
A famous family of Haarlem painters
Claes Molenaer belonged to a famous family of Haarlem artists. His older brother was Jan Miense Molenaer (1610/1611-1668), the highly appreciated painter of innovative genre scenes and a precursor to Jan Steen. Jan Miense Molenaer was married to one of the first lady-painters in Haarlem, Judith Leyster (1609-1660), who also painted genre scenes as well as portraits and still life. She may have been a pupil of Frans Hals. At young age, Claes Molenaer was probably depicted on the beautiful Selfportrait with his Family making Music Jan Miense Molenaer executed in the 1630s (see ill.).
​Jan Miense Molenaer, Selfportrait with his Family making Music
​Panel, 62.3 x 81.3 cm., 1630s, Haarlem, Frans Hals Museum.
Claes can be identified with the boy standing on the right side looking up to the bubbles of soap he has just blown. Jan Miense is the man standing left of him. His older brother Bartholomeus Molenaer (c. 1618-1650), also a genre painter, is the fourth figure on the left side, playing the violin.
​
The present winter scene is in excellent condition. The painting is documented at the Netherlands Institute for Art History – RKD – in The Hague as a work by the hand of Claes Molenaer (img.no. 1001212790).
Claes Molenaer’s winter landscapes are preserved in public collections, such as Musée Fabre (Montpellier), the Ostankino Palace Museum (Moscow), the Westfries Museum (Hoorn) and the Groninger Museum (Groningen).